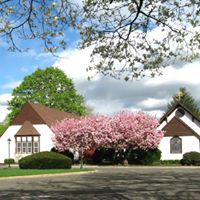 St. Bartholomew’s Episcopal Church is a parish which is part of the Episcopal Diocese of Newark, located in the historic town of Ho-Ho-Kus, New Jersey.    Ho-Ho-Kus is a small suburban town, approximately one square mile, with a population of nearly 5,000. Our town was named the number one town to live in the State of New Jersey, by New Jersey Monthly Magazine, in 2011 and then again in 2017.

Ho-Ho-Kus is in the northwest part of Bergen County, approximately 25 miles northwest of New York City. Bergen County is one of the most densely populated counties in the State of New Jersey given its proximity and easy access to New York. The city is easily accessible via bus, rail, or car. The population continuously has a segment in transit as large companies transfer their employees to and from the area.

The area served by the Parish is suburban and mostly residential. Median income and education levels are well above average. A substantial portion of the working population commutes to New York City, while the remainder is engaged in local businesses.

St. Bartholomew’s draws a considerable number of parishioners from eight to ten towns in the surrounding area. We have 110 families in our congregation and approximately 45 percent are active.  As with many other churches both in our community and country wide, one of the goals that St. Bartholomew’s has is to increase our active congregation.

We have a strong commitment to outreach. Our outreach includes food and clothing for the Ramapough Indians, monthly food donations to CUMAC, Community United Methodist Aid to Communities in the Paterson, New Jersey area, as well as clothing donations and toiletries to migrant worker families in Goshen NY.  We support the twelve-step community of Alcoholics Anonymous, offering ten meetings in our parish hall each week. We are also a resource center for those in our town in need of food or shelter.

Although we are a modestly-sized congregation, its members have often banded together to do big things. For over 10 years we hosted an annual Bistro Night, our largest fund-raiser.  This year we are changing our focus and hosting a Farm to Table Community Dinner.  We rely on teamwork to make it happen, tapping our strengths such as artistic creativity, hustle, organization … and a love for good food and drink.

The property, church, rectory and grounds of St. Bart’s is beautiful and in an outstanding location. Our members take pride in this, tending to our Memorial Garden and having a community vegetable garden that members donate plants and their time to each week to care for the crop.

St. Bartholomew’s is committed to the importance of communicating with our members in different ways.  With it’s monthly newsletter, The B-Line, Parish Facebook page, website, weekly St. Bartholomew’s “Happenings” bulletin inserts, monthly e-mail updates, we seek to use traditional and more modern methods to keep people informed of events and activities.

St. Bartholomew’s Episcopal Church has a deep and long history dating back over 100 years in Ho-Ho-Kus.

Originally settled by the Leni Lenape Indians and the Dutch, Ho-Ho-Kus is rich in Revolutionary War history. Ho-Ho-Kus is home of the Hermitage, a gothic revival mansion listed as a National Historic Site. Washington, Hamilton, Lafayette, and other British notables of the time were entertained at the Hermitage by its mistress, Theodosia Prevost. Aaron Burr courted her, and they were married there in 1782.

Residents today are also reminded of the town’s historical past by the Ho-Ho-Kus Inn. Situated in the center of the business district, it also dates to the Revolutionary period.

People often ask, “What is the meaning of Ho-Ho-Kus?”. From our town website, “As is the case with many names of Indian origin, there can be many interpretations.”

A donation of land, in 1927, on Sheridan Avenue, the present site, motivated the building of a Parish House in 1930. Even though the parish suffered financial losses during the depression, the congregation was able to add to the physical presence of the Parish by purchasing a rectory on Hollywood Place in 1942. In 1948 the old “schoolhouse” was moved to the Sheridan Avenue site and became the nave and narthex, seating 80, in a unified single unit structure. A sanctuary and chapel were added to the church and a parish house unit at the same time.

The 1950s brought further interest and expansion. The nave was enlarged to seat 187, the old church and sanctuary were rebuilt, a sacristy was added, and eight church school classrooms were added to the parish house. In 1967 the parish house and kitchen were modernized, and new church windows were added. In 1959 the church office was redesigned, and eight more classrooms were constructed. The facilities were further enhanced with the acquisition of a new pipe organ. In 1980 the parish hall underwent a full window replacement.

St. Bartholomew’s has owned four different rectories over the course of time. The current rectory, located next door to the church, was purchased in 1997. Recently, it has undergone renovation and updating work including a refinished wood floor to prepare it for our next Rector. The grounds of the rectory have a vegetable and floral garden with areas that offer time for private reflection.  The large back yard provides opportunities for play and gatherings of family, friends and parishioners.

St. Bartholomew’s had nine rectors over its 103-year history. Our most recent rector was with us for 33 years.  Many members of our congregation were children when Rev. Dan Kreller began his ministry at St. Bartholomew’s.

One of our rectors, The Rev. Judson Child, Jr. became the Suffragan Bishop then Diocesan Bishop in the Diocese of Atlanta. He also served as the Chancellor of the University of the South, his Alma Matter.

The Episcopal Diocese of Newark